Germans are switching to a plant-based diet and becoming “Flexitarians”

The Summer Season in Germany has begun and what people put on the BBQ introduces a panorama of change in the food industry. More and more consumers are doing fine without meat: They reach for vegan substitute products or put vegetables on the grill.

This trend correlates with results from the BMEL Nutrition Report 2020, presented by German Agriculture Minister Julia Klöckner on June 29th in Berlin. For this representative survey, 1000 people were interviewed between December 2019 and January 2020. An additional survey was conducted in April 2020 relating to the effects of the Corona crisis.

In the report three main trends come forward regarding food habits that have remained even after the Covid19-life is slowly changing back to normal. These are:

According to the report, the appetite of Germans for meat has been declining sharply – and has done so for the past five years. Instead, “flexitarian” is the name of the game.

Flexitarian is the new name of the game

More than half (55 percent) of Germans stated that they have converted to a “flexitarian” diet, i.e. that they deliberately avoid meat and rather often eat vegetarian and vegan meals instead. The report shows that women (62 percent) are more likely than men (48 percent) to adopt the meat-free diet.

For the first time this year, researchers from the nutritional report also asked about demand amongst respondents for vegetarian and vegan substitute products for animal food. Five percent of Germans state that they regularly use these alternatives. This is not a lot, but the number is likely to increase over the years, given increased environmental awareness. 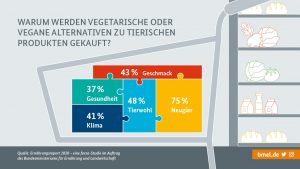 According to the study, Germans eat much less meat than five years ago. Only 26 percent of participants say that they eat sausage or meat every day, whilst in 2015, this figure showed 34 percent. Furthermore, the regular consumption of meat is higher for men than for women and the numbers are also significantly higher in the East of Germany than in the West, as regional differences still prevail in Germany.

Cooking and local food is in – due to Corona

Cooking and eating habits have changed considerably in Corona times: 30 percent of survey participants stated that they currently prepare their own food more often than before the crisis. 28 percent eat more often together with their household members and 21 percent cook more often together rather than alone.

Overall, the majority of Germans (73 percent) like to cook, and this trend moves across all age groups. However, given our busy life-styles, not everyone manages to cook regularly: 39 percent cook every day, 40 percent stand in the kitchen two to three times per week. This is still a lot, compared to the 9% that announced they never cook.

According to the study, an increasing number of consumers also want to make greater use of seasonal products with short transport routes. 83 percent consider it important that a food product comes from the region. 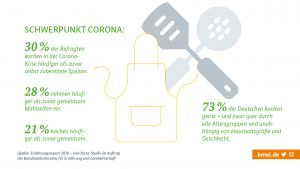 Do your homework and it will be ok!

All in all, we find that Corona has had a severe impact on people’s lives and their shopping and eating habits. As a start-up in Germany, or as an external brand to the German market intending to cross borders, it is important to acknowledge these changes. Specially the increased demand for local products needs to be taken into account, since it can turn against a successful expansion strategy, if not taken into account. So if you are a brand from abroad and obviously not local, do not pretend to be but make sure you excel on the other aspects that are valued highly by the German consumer.

If your brand is aware of these facts, you can smartly integrate them into your communication and marketing strategy, as well as your branding and image.

The original study from the German research institute forsa. can be found here.

And now about us…

Our mission is simple: we´d like to help you make better decisions in bringing your products and services to market for more successful businesses, and happier customers.

Why better decisions? 80% of businesses fail at growing. Be it startups that scale, seasoned companies that launch new products or that decide to enter new markets. Growing a business is and has been a challenging process full of bias. This does not have to be your story!

Let’s learn from the past to create the future.

For more information get in touch with us.

©️ Tagesschau. The presentation of the Nutrition Report 2020 by Julia Klöckner.